What is money and can Bitcoin function as a means of payment? 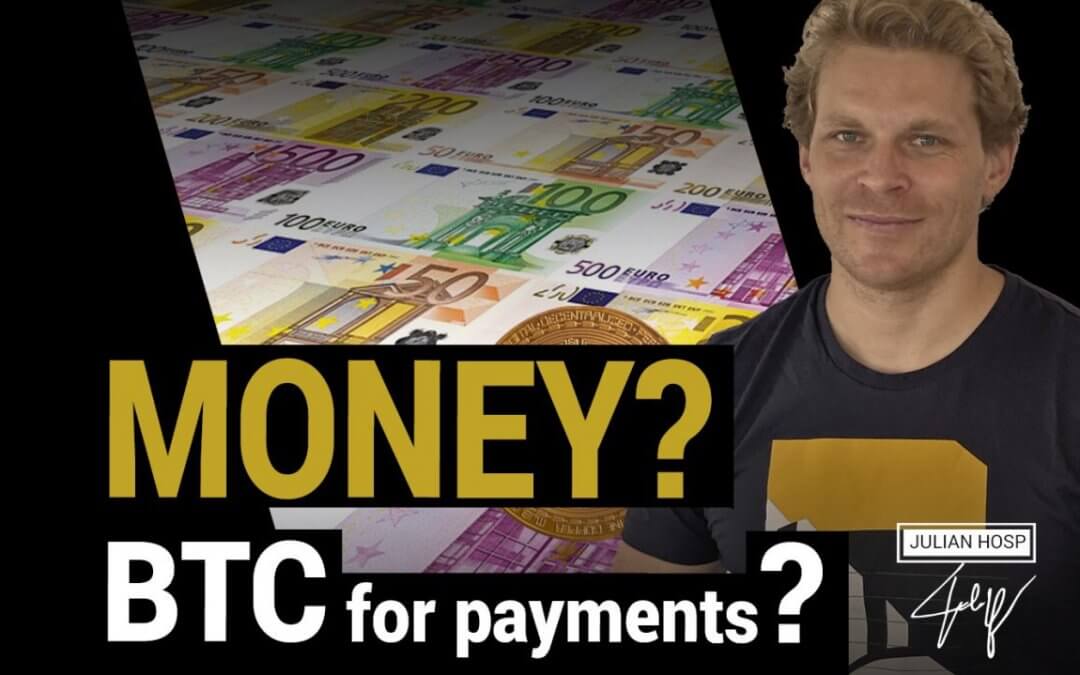 The global corona pandemic has not only turned all of our private lives upside down, but also changed the financial market considerably. Central banks are printing more money than they have done in a very long time out of an emergency situation, national debts are increasing and we have a record-high unemployment rate.

These are all factors that are crumbling confidence in the state and its currency.As a result, many people want to protect themselves, and the 12-month record high of the crypto currency Bitcoin may show that it is seen by many as a viable money alternative. But could Bitcoin really replace our current currency, the dollar? And what are the advantages of Bitcoin over fiat money?

You can continue reading this article or watch my detailed YouTube Video on that topic:

What exactly is money anyway?

Money is what people use to pay each other. That answer is simple, of course, but how do you determine which means of payment is best suited for this purpose?

In order to answer this question, one must first answer what money must be able to do. There are three main functions:

Money is nothing more than a means of payment, which should fulfil these three functions as well as possible. Some means of payment can of course do this better and others worse, but more about this later in this article. Before I do so, I would like to briefly mention another function that money, especially money issued centrally, often fulfils:

4. Control instrument
Much of the money currently in circulation is, in my view, only not disappearing and being replaced because large states, companies and banks can use it to influence and manipulate a large part of the population – especially in connection with the third point, the scale. But more on that later.

What is the best means of payment?

Now that we know what functions money has to fulfil, the next logical question is: which means of payment is best suited for this? What, no matter what happens, is subject to hardly any fluctuations in value, is extremely easy to exchange and has a fixed, easily calculable scale? Of course, there is no single true solution, and opinions on this are sometimes very different, but there are seven basic points that make a means of payment – if it meets all seven – really very good and useful.

A brief history of money

So before we now think about what the best means of payment could be, let us have a look at what mankind has used as money so far, and how it performs under the seven aspects mentioned.

At the very beginning there was the barter trade.

Eggs, bread, cows, your own labor… People bartered all sorts of things, and there was no standard means of payment.

Surprisingly, however, the barter trade does still work, as it is:

From the barter trade developed have collectors’ items such as rare stones, shells, feathers, etc.
The key advantage over “classic” bartering is one thing above all: durability. It is only dead things, which do not spoil, die, etc., but the other points like verifiability suffer a little bit from it, and it is not yet divisible or fungible. So it is still a relatively unsuitable means of payment.

So you can see: Gold has already solved many problems here, but not all. First and foremost, the lack of divisibility, verifiability and, of course, digital use nowadays. Gold may also be acceptable in some other aspects, but does not yet fully meet the criteria to be a “perfect” means of payment. A huge plus point is of course the long history and the resulting great trust that we humans have in gold today.

Until now, we did not have a central party responsible for the monetary system. Anyone could create “money” in barter, anyone could mine for gold, but that will change with the next historical currency:

The basic concept behind it is relatively simple: you take the physical gold, keep it safe (for example in a state bank) and instead of using the physical gold, you issue a written certificate that you own the gold. At first glance, of course, this is a wonderful solution, because now you don’t have most of the problems of physical gold anymore: it is much easier to transport, much easier to verify, and now it can be divided quickly and easily.

The acceptance in society was also very good for the time being. However, a huge problem caused by this centralized system was that banks relatively quickly handed out sometimes more paper gold than they actually held in safekeeping. So for the first time the scarcity aspect became a problem. And for the first time money also fulfils the fourth function which I mentioned at the beginning: It becomes a control instrument, as states now begin to “print money” at will, creating something out of nothing that should actually have some value attached to it.

This year they decided to do something that had long been foreseeable at that time: they officially abolished the so-called “gold standard”, and from that point on money existed that was not covered by anything – for which no gold was deposited – so-called fiat money, for example euros or dollars.

But let’s look at fiat money and see the seven points that a perfect means of payment would fulfil: Fiat money is digitally portable in seconds, durable, verifiable, fungible, divisible, and as long as there is stable government, extremely well accepted. One thing, however, it is no longer at all: scarce

The big problem with that? The money inflates. This means that by creating new money, for example by printing dollars, your saved 10,000 dollars are worth less (you can buy less with it), because all of a sudden there is simply more money in circulation to be spent – while the supply of services and goods is still the same. And this is the monetary system we are still in almost 50 years later, in 2020.

As I mentioned at the beginning of this article, an extremely large amount of money is being printed at the moment – but you don’t notice much of a strong inflation and a loss of purchasing power, do you? Food costs about the same and also otherwise it doesn’t seem as if you have lost purchasing power with your saved money. However, this appearance is deceptive: very many people have sold their investments, such as shares, out of necessity. All in all, many people currently hold Fiat currencies. However, these investments in particular have risen sharply in price instead of falling or not rising further due to a flood of supply and little demand. Why? There has been a huge amount of money printed, a lot of it has been allocated to companies, and fiat currencies have lost purchasing power as a result – especially in the investment sector. The stock did not increase in value, but the currency decreased in value.

The comparison with gold: if you compare the development of share prices with non-inflationary money such as gold, for example, the prices look quite different. Gold also appears to have “risen in value” this year – compared to fiat currencies – in reality, fiat money has simply fallen in value.

One thing becomes evident: the lack of scarce in fiat money is a big problem

Fiat money fulfils six of the seven points of a “perfect” means of payment, but it is becoming increasingly clear that this one missing point is serious, especially in the long term. Is there really no means of payment that could fulfil all 7 points?

Can Bitcoin function as a means of payment?

Let’s consider the seven points when using Bitcoin as a means of payment:

So you can see that Bitcoin is doing extremely well in six of the seven points, just like Fiat money, with the difference that in Bitcoin the missing point is not a fault of Bitcoin and can be changed at any time by us as a society, which would make it meet all seven points.

Then why is Bitcoin not yet used as a means of payment? Well, the Society has had barely 11 years – since the invention of Bitcoin in 2008/2009 – to recognize Bitcoin as a means of payment. Another reason is that Bitcoin was not very user-friendly, especially in the beginning, and you had to be technically very well versed to use Bitcoin. In the meantime, this has become much easier, and in the long term, our society is also developing into more and more people who are so-called “digital natives” and who have no problems at all in finding their way around applications such as Bitcoin.

What I do believe however, is that Bitcoin has already partially established itself as an investment opportunity and digital gold and will continue to do so. And if you want to get returns on your Bitcoin in a completely transparent way similar to shares or real estate, you can register now at Cake: https://cakedefi.com/

Am pleased to read your feedback in the comments!