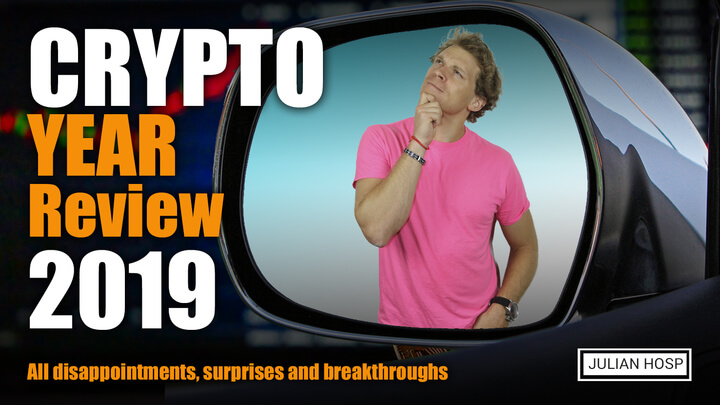 All disappointments, surprises and breakthroughs

At the beginning as well as at the end of every year I sit down and reflect on what has happened, or what I think might happen. I have learned that this is extremely important if you want to improve your own decisions. Many people confuse good decisions with good results and believe that just because a result was good, their decision was also good. Unfortunately, the opposite is often the case and the decision was bad, but people were very lucky. This then easily makes them to over- or underestimate themselves and lead to even worse decisions with even worse results in the future.

Especially in the crypto-currency area one can learn quite well from past decisions in order to improve future ones and thus, finally, to optimize one’s own results.

Altcoins were the big losers in 2019, with one coin after another hitting bottom, causing investors to lose -99% in some cases. However, this was not a big surprise for me, because no matter whether in my book “Cryptocurrencies simply explained”, in my numerous videos on YouTube or in the last blog post, I always emphasized how many coins will disappear because they have no purpose, but are purely based on hope. If you own such a coin and are considering whether to sell it or not, be sure to watch this video with some good guidelines.

The fact that ICOs are dying out was already evident in 2018. However, much hope has been placed in the regulated area of security tokens. A year ago, I warned that Security Tokens would probably cause more problems than solutions, especially in the secondary market, i.e. bartering. Pay attention to scientific data that underline this unemotionally and confirm that Security Tokens will only be an attractive solution for fundraising when regulators allow transnational guidelines, so that there is no complication but simplification in the market.

The year 2019 saw an incredible number of scammers pretending to be Satoshi Nakamoto. For the press, all these attention-grabbers were just what they were looking for, as otherwise there was often very little to report about the crypto world. Many professionals on Twitter were amused by the liars, but for newcomers it was often not so easy to distinguish between fact and fiction.

A big topic in 2019, as in 2018, was the search for the next Blockchain Killer application. ICOs provided a strong market entry in 2017 and now it was hoped to find the next big thing. Although this new “shiny object” may be Decentralized Finance (DeFi), it is not yet clear what impact it will have on the market as a whole. As a result, there is lower and lower interest in cryptocurrencies and Bitcoin, which has clearly had an impact on the price and many companies. While 2017/2018 many events and companies were still profitable, now only the best could prevail and the weak ones were sorted out. I am also not sure if we will find this Blockchain Killer application in 2020, which could lead to the next boom market. However, I have a few potential candidates which I have presented in a video.

Something that you just witnessed enormously in 2019 were the extreme pumps and dumps at exchanges. On the one hand by tether, on the other hand by whales, which move the market specifically in their favour. Even though volatility is clearly decreasing, fresh market participants, companies and governments can easily be unsettled by such movements. On the one hand, a BTC ETF in the USA was not released certainly partly due to manipulation, but on the other hand there are now also many institutional participants in the market who are using the movements for returns. However, the call for less manipulation by whales is pointless – in an unregulated market like crypto-currencies, there will be manipulation just like in any other market – if you don’t want that, you have to look for a regulated market.

After the flops, we now come to the great breakthroughs of 2019.

The biggest and most important positive news 2019 in the crypto area was probably the announcement of Facebook and the Libra Association to start their own crypto currency called Libra. For every crypto professional it was clear that this would not compete with Bitcoin, but with Fiat currencies. This not only gave the whole area a certain seriousness, it also put pressure on states worldwide to develop their own state centralized crypto currencies. China soon followed and announced that it would launch its own state crypto currency as early as 2020. The EU announced similar plans in late 2019. Only the USA, which spent 2019 printing billions of Fiat money, is blowing caution to the wind. Clearly, Libra is still in its baby shoes and it remains to be seen if, when and how Libra will get closer to its planned 2020 launch target.

Even if the next ultimate shiny object has not yet been found in the blockchain area, there is a potential candidate: Decentralized Finance or DeFi. This involves bringing traditional financial services to the blockchain, which allows everyone to use banking services and thus potential sources of income. Thus, DeFi was the number one topic of conversation, especially in the Ethereum community.

Bitcoin experienced a true renaissance and the dominance among all coins rose from almost 50% to almost 70% at maximum.

Bitcoin’s image moved away from payment and towards digital gold, which could be calculated using the already often mentioned Stock to Flow formula and was celebrated by Bitcoin maximalists. Bakkt started with Bitcoin covered products, which just made it easier for institutional investors to get started. In sum, it must be emphasized once again that Bitcoin was the best investment of the last 10 years – and probably will be for the next 10 years.

Pretty much the only Altcoin from the Top20 that could outperform Bitcoin was the BNB corporate Coin from Binance. This is not so much a bet on a real decentralized crypto currency, but rather on a company – which did many things well, but also did a few things badly (most notably an extreme data leak and a 70 million USD hack). Binance (and thus BNB) is probably the most valuable company in the crypto sector at the moment, but whether it will remain so in the long term and whether this will affect the price of the coin remains to be seen. Nevertheless, everyone who, like me, has bet on BNB was more than happy with the 2019 investment return.

While before 2019 many were still talking about governments declaring Bitcoin illegal, 2019 saw clearer communication from the authorities:

This year I see as turning point in the attitude that pretty much everyone has realized that Bitcoin can no longer be banned and that governments need to create frameworks here to work with, not against, each other. Countries like Singapore, Switzerland or Liechtenstein show this well but Austria and Germany are also following – which gives hope for a cautious optimism, as for example the Blockchain law in Liechtenstein shows.

So the tops were definitely stronger than the flops in 2019. But besides the serious investment topics, there were many other not so serious but fun highlights.

The saying “Bitcoin fixes that” was combined with almost everything. Whether it’s banks, corporations or people.

Satoshis or sats are the smallest unit of a bitcoin and 100,000,000 satoshis or sats make up one bitcoin. So the saying goes that no matter whether the market is positive or negative, you should just make sure you get more sats.

1. The difficulties in the Crypto Market:

Of course a lot has happened not only in the crypto market in general, but also for me personally in relation to crypto and business. I wanted to summarize the five most important points here as a reflection.

1. Kick out of my old company

On January 7, 2019, after my Christmas vacation, I had a nasty surprise: My two former business partners Tobi and Paul had got together over Christmas to kick me out of the company. This came as a shock not only to me, but also to my wife Bettina and my business partner Patricia, who were also dismissed overnight. Subsequently, there were many false reports in the press and in public, which almost caused a depression in me. I withdrew the whole first quarter to gather energy and to get the maximum out of the remaining nine months. Looking back, it was the best thing that could have happened to me, because now that Tobi and Paul have led the company into irrelevance, they are now running it to the ground. With the two at the head of the company, I think investors will probably never see their money again, which the two of them will spend in a relaxed manner over the next few years.

A basic principle of investing is that when the facts change, so must opinion. In my case, this meant that the old company token had become worthless due to my kick out and the price would go to zero (the price crashed the whole year – stronger than many other coins). So in March 2019 I sold all my company tokens to exchange them for Bitcoin. The decision was solid, especially since all other token holders had enough time to sell before. What I couldn’t know, of course, was that already in the following month, April, Bitcoin started to grow almost fourfold. I could not have chosen a better timing. In the winter of this year I bought Bitcoin again and so my crypto investment had almost 100% return this year. One can be satisfied 🙂

Besides the investment success I wanted to continue to own a company in the crypto sector. Together with a former employee named U-Zyn, I started our company Cake. Bettina and Patricia joined us again and also some of the old investors. They knew that they could trust me and that Cake could become successful. With Cake, we operate in the DeFi sector, which became a hype topic in the second half of the year and of course plays right into our hands.

Previously, my first company I-Unlimited, which I founded in Hong Kong in 2012, was very involved with my other company, which often made it difficult to implement things. Now separated, we had the full breakthrough. With a great team we expanded aggressively, launched a new book, new digital products and had two successful cryptonight tours throughout the German speaking Europe.

A dream, which I always wanted to realize, was to have a good mastermind in the crypto area. So a group with whom you can exchange ideas, share (legal) insider information and where it’s all about meeting great people and maximizing investment returns. Without the ballast of my old company I finally had the freedom to do this and the Inner Circle is the absolute success.

In conclusion, even though the year started with an absolute shock, it went pretty much as expected. Entrepreneurially and financially, 2019 was an absolute success and if 2020 is anything like that, I am more than satisfied. Many people for whom 2019 did not go so well from an investment point of view often make investment decisions based purely on emotions and hope for luck in order to achieve good results. Rather, these people need to reflect their decisions better and have them backed up by facts in the future.

In one of the next blog posts I will reflect my whole year 2019, not only from the Crypto side, but with relationships, business, learning, and much more. Furthermore I will give a preview for the crypto trends 2020.

Finally, I’d like to know what 2019 was like for you from a crypto point of view: what was good, what was bad, what did I forget to mention? Please let me know in the comments or here in our group on social media!

See you next time