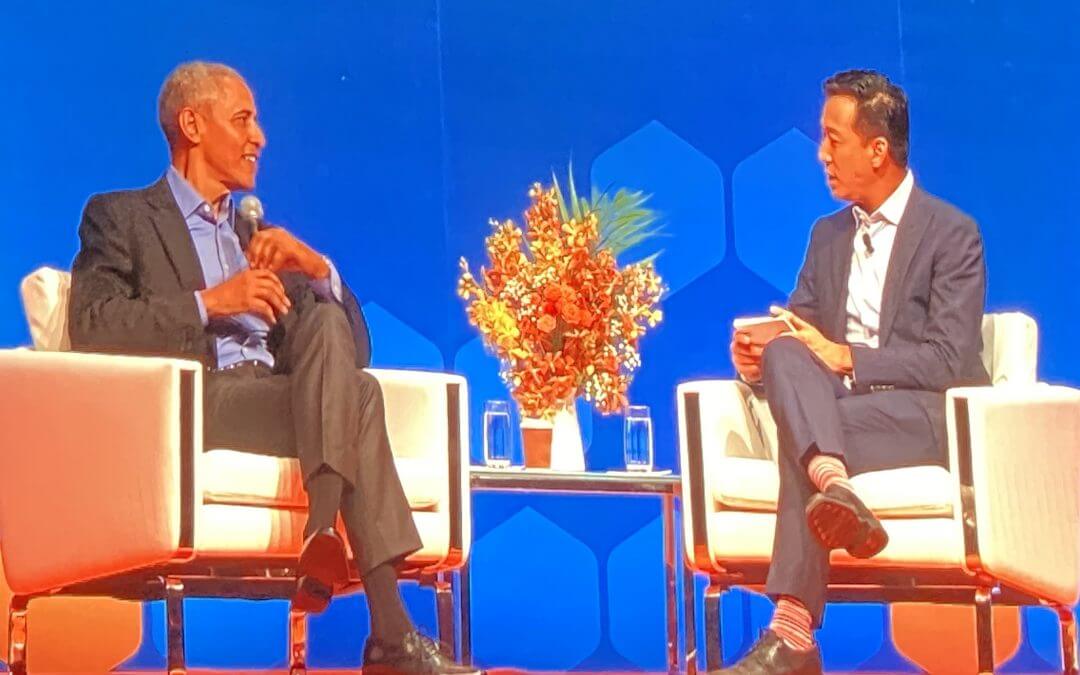 Like Michelle Obama’s summary a few days ago, today I would like to give you a short summary of the 90 minutes with Barack Obama. My email on Michelle Obama has raised a lot of questions (very cool, thanks!!!), and I’d like to start with 3:

Julian, how do you take notes during such an event?

Normally I take notes in my notebook or iPad, but because I wanted to take as little as possible with me for security reasons at this event, this time I took notes in the iPhone note app. The more important point, however, is the mental attitude: “You have to take notes as if you had to write a short blog post afterwards“. With this in mind, you do not only take notes more accurately, but you also pay more attention and structure your thoughts better. Actually, you should do it this way whatever you do: reading books, watching movies, listening to audio books, etc. – take notes as if you have to write a blog post about it.

Julian, are you an Obama fan?

No, I’m not an Obama fan, but I’m not an Obama hater either. I think the Obamas do some things well and some things not so well – just like everybody else. I try to learn from people – to copy the positive things and to leave out the negative things. I think the Obamas have both sides as well. Just at the lecture of Barack Obama on Monday, I remembered a saying from an American friend who doesn’t like Obama at all: “Good speaker, little substance”. – haha, honestly the 90 minutes on Monday were mostly like this. There was some good content, but also quite some not so good.

What are the security measures like at such an event?

Similar to when you’re at the airport

A few further thoughts about the event with Barack Obama:

Now let’s get to the actual topic:

Obama had been clearly prepared for every question, but his answer to this specific question was really excellent. He explained that of course there would be a lot of points here, but he didn’t want to have one in his top 3 that had been around for decades anyway – like nuclear weapons or world war, for example. But he wanted to focus on 3 topics that have really come up in the last decade:

I think this is an issue that we all notice at the moment, not just politically, but in pretty much every issue. What I found exciting, as Obama described, was that these waves of “polarization vs. centre” come and go again and again. And that it would be important right now not to get too involved in polarization too much. He said it was the normal counter-effect to all the decades of calm.

On this topic, he spoke mainly about how important it would be to pay attention to scientific data and not to have an unfounded personal opinion on a subject. Personally, I believe this is true in many other areas where people like to adopt an emotional irrational attitude in order to either get attention or simply not have to question their beliefs.

The logical third point was where pretty much every (often pointless) discussion takes place in today’s world: Online. Obama discussed how he regarded social media as important because he also owed his election victory to Facebook, but he also sees how dangerous it can be.

On the one hand because of people’s dependencies, on the other hand because people don’t bring up scientific data but emotions, which often results in intensified problems and doesn’t calm them down at all.

In any case, his points made sense and he combined data with good jokes – at least partially. If I had the chance to join him or Michelle in a talk again, I would for sure need a good new topic that would interest me a lot. This time it was definitely worth it and was super interesting, but it comes very close to “you should once, then not again”.

Personally, I always find it interesting when you see these people from the press and then to notice in person that they are not much different from you – with all their fears, desires, problems and hurdles. This always motivates me enormously, because it inspires me to get the most out of myself.

I hope this gives you some value from what I learned in the two days with the Obamas. Let me know by replying to this email or social media. If you have any other requests, please feel free to contact me.

Have a nice week,